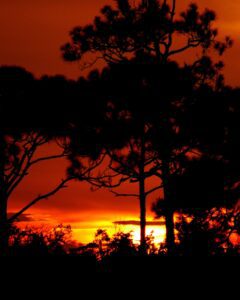 Who doesn’t love Peter? Big, tough guy fisherman, boldly going where no disciple has gone before, first to speak up, first to react with the sword, first to proclaim who Jesus really was, first to swear undying love and loyalty to the Lord, and the first to openly deny Him! Peter was quite a guy, one to which we all can relate. After His resurrection, when Jesus confronted him on the beach three times about his love for Him, Peter’s heart was grieved. “You know I love You Lord” was all he could say. Three declarations for three denials. How many times would Jesus ask you, “Do you love Me?” How many times, whether by words or actions, have you denied Him? How many times, from watching your lifestyle or listening to your speech, would people question your love for the Lord? We aren’t a perfect people, and like Peter, we all have failed Him one time or another. Maybe not blatantly, maybe only subtly, but we still have let Him down. Yet the beauty of His amazing grace is that just like Peter, we may have failed Him in some way, but He knows if we still love Him! Funny how it was Peter who encouraged the churches to be holy because He is holy. We won’t be perfect, our holiness may waiver, but we need to never stop trying! Then someday if He asks you “Do you love Me?” you will be able to answer, “You know I love You Lord … and He will!

It Is Not Over

December is a great month; celebrations, parties, decorations, parades, almost everybody is happy, smiling, kind to one another, and then, it’s over! For some cynical people, December 26th is their happiest day of the year because Christmas is over. For many people, December 26th is their saddest day of the year because Christmas is over. But … it isn’t! Jesus came to be our Lord and Savior every day, for all our lives, for eternity! The world accepts the babe in the manger but not the man on the cross and that’s where the celebration really is! While it’s not realistic to do the outward December celebration all year long, inwardly that celebration should be going on every day. If you accepted God’s grace and given your heart to Jesus, it’s not over. The celebration is never over! You’ve got a loving Heavenly Father, a personal Lord and Savior, a 24/7 on call Councilor, and a Heavenly home waiting for you! The lights may come down, the parties may end, but it’s not over, it barely has begun! 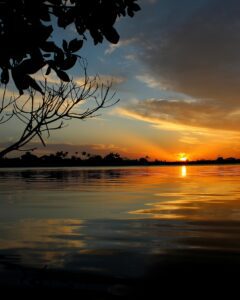 Some people say way too much, some people say too little, some people say what needs to be said. Sometimes when we look at the Gospels we wish more had been said about the miracles Jesus performed, the words He spoke, the lessons He taught. The one time saying too much would have been okay, but the Gospel writers said what was needed to be said. We have all we need to understand and obey. We have all we need to know how to be saved. God knows we get confused easy so He kept it simple. Have faith and believe in His Son, repent and accept Him as your Lord and Savior, get baptized as soon as you’re able, and then start living the life to which He called you. Pretty simple really, a logical order of steps to follow. Sadly though, no matter how much, how little, or how just right we tell people about Jesus, some people will not believe. John the Baptist made a chillingly clear statement to his disciples. “He who believes in the Son has everlasting life, but he who does not believe the Son shall not see life, but the wrath of God abides on him.” Jesus did His part and now patiently waits for any who seek Him. His salvation is available to all who choose it! His amazing creation bares witness to His awesomeness daily. His Word speaks to whoever chooses to hear. He has said enough, now it’s up to you to respond! 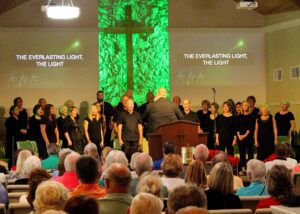 We may have already had the white elephant bean supper and Family Christmas night on Capri, but the season isn’t into full swing until the choir presents its cantata and yesterday it did! While completing his Master’s degree program amongst all his other duties, Pastor Steve still managed to teach the choir a challenging cantata which they performed flawlessly to overflowing audiences at both services. Thank you Pastor Steve and choir for a moving, meaningful morning. As the season continues to gear up, don’t let all the hustle and bustle, the pressure to buy presents, the parties and parades overwhelm you. Be overwhelmed by that silent night, that holy night when Christ was born. Christmas may be good for the economy, as the world clearly thinks, but Christmas isn’t about the economy or us giving each other gifts. Christmas is about us receiving the greatest gift ever given, God’s gift to us, His Son. Christmas is about receiving Jesus! Enjoy this season, the festivities, the lights, family, friends, but never let the lights on the tree dim the light of the star in the stable! 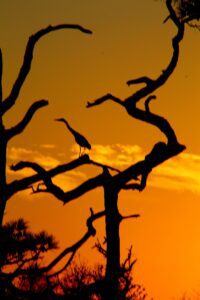 When Jesus first appeared to His disciples after His resurrection, Thomas wasn’t with them and refused to believe they had seen Him. Thomas had traveled the dusty roads from village to village, he had seen Jesus perform countless miracles, heard the words and teachings straight from His lips, yet he still couldn’t believe it was true, he had to see for himself. It is hard to believe in what you can’t see, what you can’t physically touch. That’s why it’s called faith! Are you a doubting Thomas? Do you sit in a pew every Sunday morning and nod and say amen and go home unsure? Why? You have the witness of the Gospel writers, of Paul, of over 500 brethren who saw Him at one time. You have the words of John, “… but these words are written that you may believe (not doubt) that Jesus is the Christ, the Son of God, and that believing you may have life in His name.” Yet the greatest witness is that of the Holy Spirit in our hearts! Time and again, He will touch you in subtle, personal ways that brings peace to your soul. Don’t be a doubting Thomas! Faith takes a commitment, make that commitment and let the Lord have your heart! Christianity isn’t a once a week, Sunday morning thing. If that’s all it is to you, you will have doubts. Christianity is a personal relationship with our awesome, loving Heavenly Father, His Son, and His Holy Spirit, that moves us to follow His word and worship and honor Him, not only Sunday morning but every day! Having a loving, caring church family to do that with is a bonus! Time to trust Him in all things, with all of your heart, and let Him drive your doubts away!